Under Camiguin sky and right under that erected cross marker is a not-so-happy story. In fact, some people think of it as creepy.

Camiguin island in Mindanao, Philippines had experienced major volcanic eruptions in the years 1827, 1862, 1871 and in 1948. And It was during the 1871 eruption of Mt. Vulcan that the old capital of Camiguin along with many of its residents met their tragic end. The area including its old cemetery also sunk as a result of the eruption. The 1948 eruption reportedly sunk the area even deeper. And so the cross marker we now see, built in 1982 is a reminder of where the community cemetery was once located. 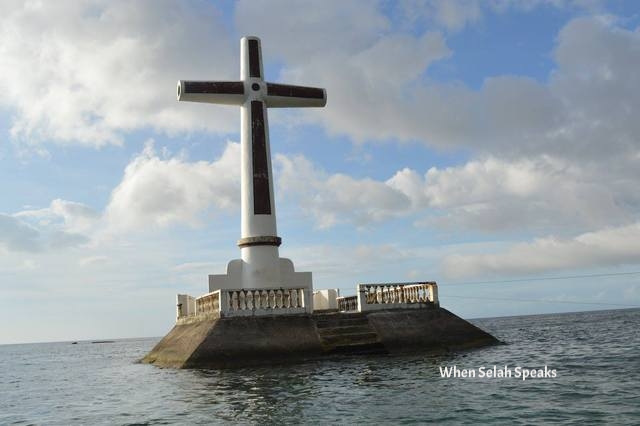 As I stood in the area surrounding the cross maker that hot day in December (you can sail to the marker from the seashore), I kept thinking how quiet, how serene the place was when story upon story had been buried beneath the waves of the sea.

Note: I took the above photo during our family trip in Camiguin. You can read more about our Camiguin trip here. This is also my entry to Skywatch Friday. You can find some cool sky photos there 🙂