When we visited Thailand last year, it wasn’t really part of the plan.

The destination was New Zealand but to get there from my part of the world, my husband and I had to fly to Bangkok, Thailand first and then fly to Auckland, New Zealand from there.

Our layover was long and so my husband and I decided to meet one of my friends there and go around, at least a bit, in the City of Angels.

I decided to bring my husband to the Grand Palace as he missed seeing it the last time we were in Bangkok in 2011 due to heavy flooding in certain parts of the city.

Well, it turned out the same. We were still unable to explore the palace as planned.

As Bangkok and the whole nation of Thailand was mourning the death of its king, King Bhumibol Adulyadej, we were denied access to the palace grounds. 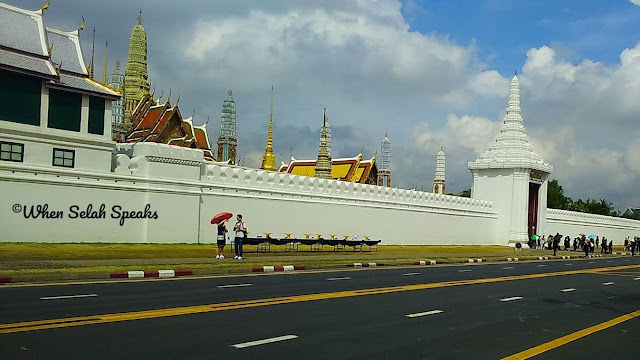 As foreigners, we were not even allowed to move near the gate.

There were so many people, specifically Thai people, in the surrounding area, streets. Some were lining up to go inside the palace gate while some were outside waiting.

Free food and drinks were distributed by different groups (government and commercial) to the hundreds of mourners. And as we were walking around, trying to get as near as we can to the gates, we were given also food and drinks.

I think they did this as we look so much like Thai people and my friend (who has been living in Bangkok for many years) and I could talk to them in their language. It is actually hard to tell apart Filipinos from Thais.

After a year of mourning, the King’s body was cremated just last week, October 26 and was then buried on October 29.

I feel a certain affinity and affection for the Thai people, having served and lived there before for 3 years. And so it is my prayer that Thailand will move forward well and good under its new king.

Check out Skywatch Friday for more sky and nature shots.